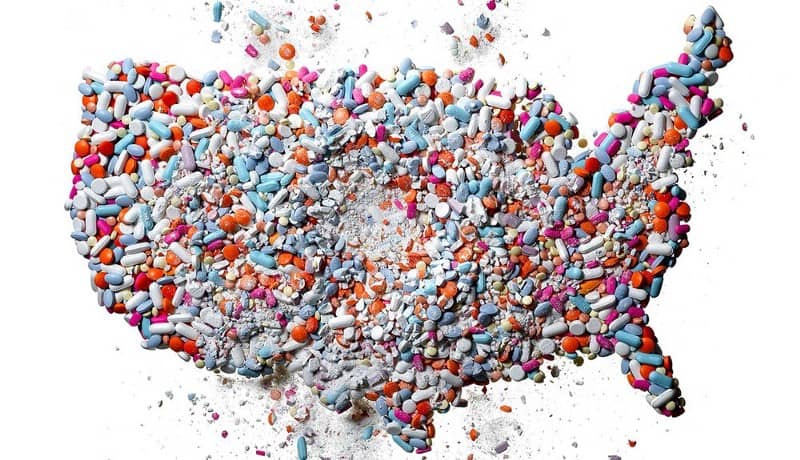 A problem that’s been growing at an alarming rate over the last few decades, and is now responsible for the death of over 140 Americans every single day.

From prescription medication to heroin and synthetic opioids―the widespread misuse of both prescription and non-prescription opioids has evolved into such an issue that the Department of Health and Human Services declared it a public health crisis in 2018.

While numerous programs have attempted to solve the country’s opioid crisis throughout the years, the death toll has continued to rise…

With a grim future ahead if this problem goes unsolved, promising findings from several recent studies indicate that cannabis-derived Cannabidiol (CBD)could be the answer we need.

As CBD legalization continues to broaden, could this be the beginning to the end of America’s opioid epidemic?

So, you might be wondering how we got ourselves into this mess in the first place…

“It was the result of an evil master plan carried out by the most sinister villains” the conspiracy theorists are probably thinking to themselves.

It all started back in the 1990swhen big pharmaceutical companies assured the medical community that patients would not become addicted to their opioid pain relievers.

“Addicted to opioids!? Impossible!” was probably what they’d say…

Because health providers had no reason not to believe the pharmaceutical companies at that time, they began prescribing these drugs at greater rates.

By the time people realized just how dangerously addictive these opioids actually are, it was too late―overdose rates had begun to skyrocket…

With the death rate showing no signs of declining, this is a problem that we simply can’t ignore.

The Potential for CBD Against The Opioid Epidemic

Cannabidiol (CBD), is a non-psychoactive Cannabis compound, that can interact with receptor’s in the body’s Endocannabinoid System (ECS).

The receptors in the ECS are distributed throughout core systems of the body, such as the skeletal system and respiratory system; however, a majority of the receptors can be found in the areas of the brain responsible for mental, cognitive and physiological processes.

Because of this, CBD is able to provide relief for mental conditions such as anxiety, stress, and depression.
Naturally, this led researchers to wonder if CBD could also alleviate the mental and neurological disorders associated with drug addiction.

Based on the findings from several groundbreaking studies, it appears that it just might.

In this 2009 study published in the Journal of Neuroscience, researchers sought to determine the impact of Cannabis compounds on neuropsychiatric disorders.

To conduct their research, they examined the effects of CBD on self-administration and drug-seeking behavior in an animal subject.
After administering a single 20mg dosage of CBD, the researchers found that it had inhibited “cue-induced heroin seeking” and “had a protracted effect with significance evident after 24 [hours] and even 2 weeks after administration.”

In the study, the researchers examined the effects of CBD on brain reward function and on the reward-facilitating effect of morphine and cocaine using the “intracranial self-stimulation (ICSS)” paradigm.

During their investigation, the researchers found that larger dosages of CBD significantly inhibits the reward-facilitating effects of morphine.

Based on their findings, the researchers concluded that CBD “may be clinically useful in attenuating the rewarding effects of opioids.”
“Cannabidiol as an Intervention for Addictive Behaviors: A Systematic Review of the Evidence” (2015)

In this 2015 study, researchers performed a systematic review with an objective of summarizing the available preclinical and clinical data on the impact of CBD on addictive behaviors.

Based on their findings gathered from 14 different studies, the researchers found that CBD showed beneficial impacts for opioid and psycho-stimulant addiction, as well as tobacco and cannabis dependence.

The researchers concluded their study by discussing that the dreadful burden of substance abuse creates the necessity for further studies to evaluate the potential of CBD as an intervention for addictive behaviors.

“Unique treatment potential of cannabidiol for the prevention of relapse to drug use: preclinical proof of principle” (2018)
In this recent study, researchers ran a series of tests to determine the “anti-relapse” potential of transdermal CBD.

The researchers administered transdermal CBD to animal subjects who had a history of self-administering cocaine or alcohol and exhibited characteristics of a relapsing addict such as dependency, anxiety, and impulsivity.

After administering CBD once every 24 hours for just seven days, the researchers made a profound discovery.
Not only did CBD prevent the development of previously displayed “addict-like” characteristics, it deterred the subject’s from relapsing for over 5 months.

CBD May Be Effective Against Addiction… But Is it Enough?

While further research is definitely needed to determine conclusive results, the findings from these studies are very promising.
With the CBD legalization drawing near, many are now looking to it as a realistic solution to the opioid crisis.

Now, the evidence presented in this article is certainly compelling, and we’re all rooting for CBD legalization, but… is CBD, alone, enough to get us out of this mess?

Just as using CBD won’t magically heal our every ailment, legalizing CBD will not magically reverse the damage from decades of opioid addiction.

While the legalization of CBD will lead to the recovery of thousands of individuals struggling with opioid addiction, and will serve as a crucial victory in our battle against this epidemic, CBD can’t beat it alone.

To truly overcome this problem, a significant change in our culture is needed.

The Root of Our Opioid Epidemic

The reason our opioid crisis has grown into an epidemic, is because our society has let it.

When we face health problems, instead of making much-needed lifestyle changes, we rely on medication for quick relief, which is temporary and often followed by health issues and dependency.

While a substantial health and wellness movement has begun to develop, we still have a long way to go.

Millions of Americans still eat fast food every single day, and countless others genuinely believe that the answer to their health problems comes in a capsule.

It’s this same culture that’s responsible for the horrifying number of deaths caused by opioid overdose, and it needs to change.

When we finally legalize CBD, it will undoubtedly enable millions to overcome opioid addiction, but it can’t put an end to this epidemic alone.

To drive this change, it won’t be easy. We all need to do our part to build awareness by educating and inspiring those around us.

With a change in how we value health and wellness, as a culture, combined with the preventative capabilities of CBD, we can defeat this opioid epidemic.